Like many, I just spent a healthy portion of last week taking in the British Open via my laptop and television. Between the barrage of Rolex commercials and kitschy Mastercard ads—nothing speaks of the Old Country like a credit card slogan recited with a Scottish accent—there was an undeniably great golf tournament on display. As we know, the vast majority of people that witnessed the crowning of the Champion Golfer of the Year did so not at Carnoustie, but from their own couch. It is with this in the background, that I’d like to take a look at a John Updike essay titled, fittingly, “Television Golf.”

In it, Updike—who I consider a foremost fairway philosopher—writes of the experience of watching golf as a devoted but decidedly amateur player himself. As a couch-bound patron, Updike sees certain real benefits televised golf brings us. He also takes notice of the limitations of the medium.

First, the good. Updike points out that viewing a tournament on TV provides unmatched views of the action. He goes so far to say that no other sport’s spectators benefit more from the game being televised than golf’s. Instead of attending the competition in person where you might be, “scurrying from here and there among the ropes and marshals and straining for a peek over the heads of hundreds of other spectators,” the domestic golf-viewer, “sits at ease and sees shot after shot in close-up.” By the end of Sunday’s viewing:

one rises up from the sagging couch bloated with golf, dazed and bedazzled by the beauty of the game, the slickness of the greens, the smoothness of the swings . . . the lavishness of the purse, and the manicured glory of the eucalyptus trees, or Georgia pines, or royal palms, or whatever they were.

And yet, says Updike, something significant is absent from televised golf: “the third dimension is missing.” The scale and proportions of the game are lost, that is, the “serene space of it all.”

According to Updike, much of golf’s joy is being there where the golf is happening. It’s “the walks and waits between shots, the textures and smells of out-of-doors,” the feel of the place and that unique experience of time one gets from the game. Provocatively, Updike argues that televised golf does something similar to a “pornographic film,” it “reduces golf to a two-dimensional spectacle.” It contorts, reduces, and flattens something that is so much more:

In its tendency to show golf as a series of putts that go in the hole or not, television presents a complicated, pleasurable activity stripped of foreplay, feeling, and the vast terrestrial and atmospheric context.

Updike moves on to theorize that many of us watch golf on television with hopes of improving our own games. The pros share some common traits worthy of our esteem and emulation. Comfortingly, however, “television golf offers a reassuring variety of workable styles.” We might even wonder why some of the idiosyncratic swings on tour lead to such great effects, but we stand consoled by the variety of tempos and techniques, hopeful our own could be as effective someday.

But as Updike ruminates, in time we might wander from the golf to another station or even let ourselves doze off with a nap. And here is the key difference Updike highlights between the pro golfer playing on television, and the once-a-week golfer on his duff: “the men who excel at golf do not let their attentions wander.” He also diagnoses the non-professional golfer—clearly here thinking of himself in this mix—as having a “secret will to lose.” Sort of like self-sabotage. Yet, the pro never rebels “against repeating the same workable swing.” So it is that, “even when we switch them off, they keep on playing. And that is why they are inside the little box making millions, and we are on the outside making a deep dent in the davenport.” 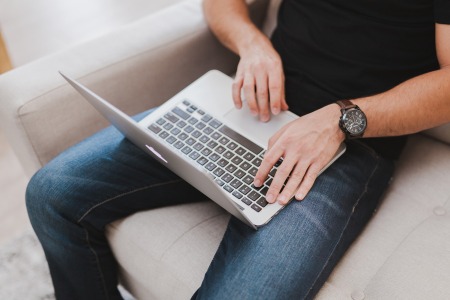 I think Updike’s overall thrust rather provocative, and in some very real ways, insightful. I would say his critique of the very medium of television—and the way golf is covered through it—is illuminating. It does in fact present a flattened and less rich version of the actual happenings on the course. It can’t do otherwise. There have been improvements in coverage, I think though. These don’t surpass the inherent limitations of television as medium, but the use of the medium has improved.

In particular, I have to give credit here to Fox’s coverage of the recent U.S. Open. Especially when uninterrupted by commercials, I thought Fox let the tournament breath, documenting the deliberations of players and caddies. It also seemed to capture the scene of Shinnecock, communicating something of its beauty and scale. The added audio sensitivity did provide for the novel sound of the ball rattling around the cup, but this oddity was far outbalanced by the added access to the thoughts of players and caddies. (I also say this having been very put out by the way Fox covered its first Open at Chambers Bay—did you know Jason Day suffered from vertigo there?—let’s just say they’ve shown great improvement.)

Another nice development since Updike’s time is online coverage. I do like being able to follow a particular group, or small set of groups, around the course. It provides for a greater enmeshment into the experience. Now, of course it is not anywhere close to the experience of playing a course, or even following a group in person. But, given what it is, a televised event, improvements have been made to slightly soften Updike’s critiques.

Given all this though, I think his criticism does not in fact undermine the worth of televised golf. What it does, though, I think, is give us a better sense of what that worth in fact is, and why even though we enjoy watching golf on television, we still look for so much more from the game.