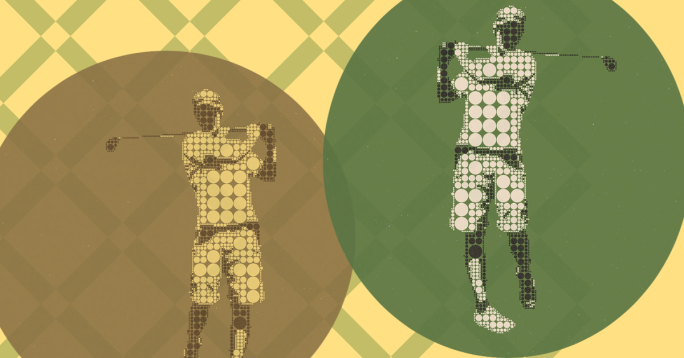 Like many these past few months, I’ve watched with amused amazement as Tron Carter, of No Laying Up notoriety, has undertaken the willful experiment of playing his golf left-handed. This curious crossing-over seemed at first a playful ruse destined for a quick flash followed by a slow fizzling out. But with a certain doggedness—and much to his credit—Carter continues to approach his ball from the right.

This southpaw sojourn has yielded surprising results—amongst other things, that lefty finish often looks quite athletic—and has elicited a certain sympathy from the onlooker. Who can’t subscribe to this enterprise of pure grind, especially considering the utterly absurd and gratuitous lack of necessity to the whole thing. And I say this as a compliment. As I’ve recently been taking in the recent installments of NLU’s “Tourist Sauce: Oregon,” I’d say that this quixotic enterprise has also made for good theater.

It was with a not dissimilar joy of discovery that I recently came across a short piece of Bernard Darwins’ that considered this very sort of thing. In this brief essay, titled “The Re-birth of a Golfer,” Darwin opens by considering a fairytale wherein a soldier steals a magic box, within which are hidden three wish-granting dogs. As it goes, this sets matters in motion to the point where the soldier ends up wealthy and wed to the princess. Darwin stands envious and muses on that future moment when “some benevolent magician” will grant his every wish. He thinks one of these wishes, though modest, would “make us all happy.” This, namely, the gift of being “allowed to begin all over again the learning of some pleasant art.”

For the adult, once joyous and intoxicating activities like bike riding often lose their youthful luster and become tiresome. Our first forays into that form of self-propulsion, however, were so wondrous and wild: “can anybody deny that there was a romantic thrill in his earliest wobbles?” These for Darwin were remembered vividly: “a blazing hot day in September on the lawn at home, an angelic and perspiring parent who held me and the bicycle, while we made curious zig-zags across the grass.” The road we glided over on our first bike, “seems to me, in retrospect, to have been fringed by fairy trees and jewelled flowers.”

Regarding the genesis of his own golfing life, Darwin remarks: “I began golf so long ago and at such an immature age that I can recall nothing about it, but it must have been delicious and I wish it could happen all over again.” Then he proposes something exotic:

If one had the strength of mind to do it, I believe it would be well worth while to start again as a one-handed player and pant for the day when one was given a twenty-four handicap. Or, perhaps, left-handed would be better . . . . No doubt there would be disappointments in store, but one would be getting slowly better instead of getting rather quickly worse, and there are few sensations more enchanting than the consciousness of improvement.

I have to confess that I don’t presently have the “strength of mind” deemed a prerequisite by Darwin for the flip to the other side of the ball. I still hold out hope that my regular right-handed play will yield that enchanting sensation Darwin associates with the “consciousness of improvement.”

And yet, who can deny the appeal of beginning again, of being a golfer reborn? The game seen with innocent, expectant eyes. The course a wonderland, one’s body some strange amalgamation of motion. To throw oneself through the looking glass, headlong into what Darwin describes as the “strangeness and topsy-turvy-dom of being on the wrong side of the ball.” I imagine that at the very least, the joys of golf would be keen and fresh, which is what we looked for in the game in the first place. And perhaps what Tron Carter has found in his reborn golfing life.